Prior to being a viticulturist I spent much of my time touring Scotland as an opera singer. After a few years of trying I finally persuaded my sun loving now husband to join me on the summer tour of Massenet's Manon. This involved the odd performance of a not particularly demanding role so we turned the tour into something of a holiday – driving from venue to venue by way of a selection of gorgeous islands, romantic castles and wild mountains.

Said mountains were often hidden under low lying cloud, we had 3 glorious days of sunshine on Arran and then proceeded to have days of sleet, snow and general miserable weather as only a Scottish summer can provide. 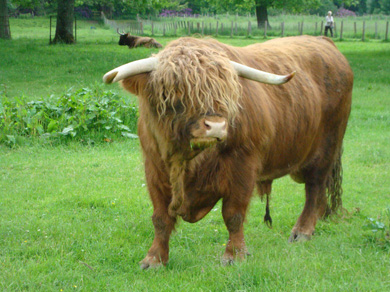 All was not lost however as we formed a deep attachment to the gloriously shaggy Highland Cattle we came across – who were coping with the weather far better than we were. Looking like extras from a hair care advertisement these beautiful, hairy beasts with their majestic horns became a favourite part of our Scottish scenery. We would round a corner on a spectacular road, spot a field and with enthused war cries of "Hairy coo!" screech to a halt and try and take a photo. This methodology led to a number of shots of hairy coo rumps heading for the hills until we altered our technique, stopping gently and getting the first photo from an open car window before endeavouring to get out. 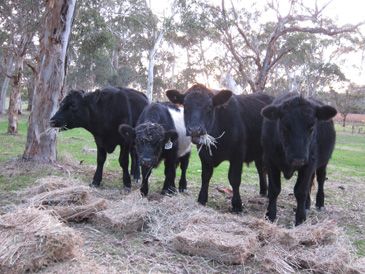 Fast forward three years and we (somewhat surprisingly) found ourselves the owners of a beautiful vineyard in the colder part of the Adelaide Hills complete with several hectares of paddocks and grass that we had to control one way or the other. We commenced our cow experiences with some black Angus named T-bone, Mignon and Stu – I'll leave it to the reader to decide what happened to them!

We were also keen on the wonderful black and white belted Galloways and decided to buy one of these too as a decorative lawn mower. Unfortunately the cow salesman saw us coming and we received the bastard love child of a Friesian and a Belted Galloway. Humbug is a most interesting specimen who has never grown particularly large and whose "belt" is only clear on one side – progressing to random spots on his right flank. 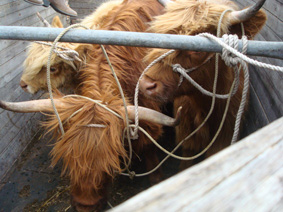 It was definitely time to upgrade our decorative lawnmowers. Research found us a Highland Cattle (their "official" name) stud in the Barossa where drought and the recent loss of agistment land meant the owner was keen to sell some of his cattle. We duly visited and fell in love with Daisy – who with her dark chocolate coat and beautifully curved horns was all one could ask of a Hairy Coo pin up. We chose a young steer with a good even set of horns as well who we named Duncan. And then there was Fergus – a dread locked, runt of a steer with horns that stuck straight out giving him a woeful expression. I was not impressed but Nick felt sorry for him so we took Fergus as well. 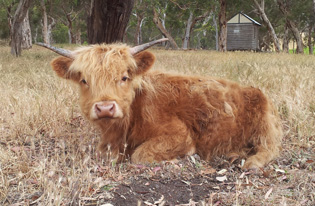 To our surprise, on introducing Humbug to his new Scottish friends he took the opportunity to become something of a bully. After years of being pushed around by the massive Black Angus he obviously decided to dish out what he had been taught to the smaller Highland steers and didn't seem unduly bothered by the fact that they had horns and he didn't (he is a very stupid cow!) He and Daisy have since fallen irrevocably in love. They roam the paddock together and share piles of hay, and once every 28 days or so get a bit silly with scant regard to the fact that Humbug is not equipped. The mind boggles imagining the sort of calf that might result so it's probably just as well!

Being somewhat busy building a house, starting to make our own wine and learning how to sell it we have yet to do much more with the decorative lawnmowers but feed and admire them. However at some point in the future we will give Daisy a date with a straw and see if we can produce a hairy coo calf. We may time it with the release of our first Shiraz and a competition to come up with a name for the new addition. Watch this space.

In the early days of South Australian winemaking a grower planted a collection of the Semillon Madeira clone in the Barossa Valley sometime in the 1930s... Read more