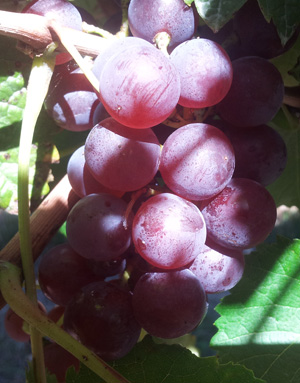 In the early days of South Australian winemaking a grower planted a collection of the Semillon Madeira clone in the Barossa Valley sometime in the 1930s. The cuttings most likely came from South Africa. One in every 30 vines demonstrated the naturally occurring genetic trait of having pink grapes instead of the more usual white.

In 1995 the Southcorp viticulturist and winemaker Neville Falkenberg went to the trouble of hand selecting canes from the red berried vines and transplanting them as a distinct variety in three cool climate vineyards alongside their white skinned Madeira cousins. Neville believed the Red Semillon had slightly thicker skins and fuller, larger berries and would be better at resisting cool climate mould than the white variety. He also found the red berries fuller flavoured with more of a citrus and melon character than the normal Madeira variety. When we virus tested our vines before grafting the Madeira to Cabernet in 2012 we were fascinated to discover that the Red Semillon had a different virus profile and therefore is noticeably different to the Madeira at a DNA level.

Having bought the vineyard and spent two years looking for someone who could tell us about Red Semillon we then had to decide what to do with it. Semillon was proving tricky to sell at the cost of production so the Madeira was always headed for grafting but we decided to hang on to the Red Semillon because no-one else had it and, personally, because the pink berries are just so gorgeous! 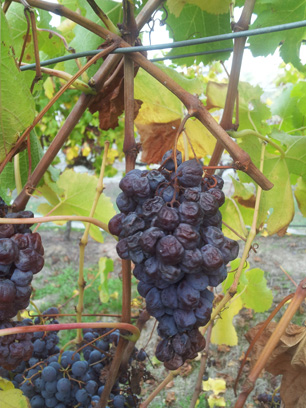 Past owners of the property had experimented making a Semillon from the Red Semillon grapes but the colour didn't come through in the finished wine. We like the idea of making something pink from the pink grapes, and figured that if we dried the grapes by cutting three quarters of the canes and letting the bunches dry out the skin deterioration might help with colour transfer. With helpful family members we went through and cut the requisite canes when the grapes reached 13 Baumé. Luckily 2012/13 was the driest growing season in the Adelaide Hills for 17 years and so we managed to dry the grapes (and intensify the sugar) up to 18 Baumé before we eventually harvested. We lost a lot of grapes in the meantime to birds who got in under the nets and a particular group of large and clever kangaroos who sucked whole bunches off the vines like candy.

Our finished wine is now sitting in tank and we will shortly bottle it, label it and then release our first Top Note baby out into the world. Hoping you'll all buy a case and share our first wine story!